Its winter here in Floripa, so not every day is beautiful.  We had a long stretch of cold rainy days, which finally came to an end last week.  To celebrate, I went on a little surf adventure which soon became epic!

School started yesterday so the buses are full of cute Brazilian sprouts,

This map shows Barra da Lagoa (A) and Praia da Galheta (B). The big body of water to the west is actually a lake, Lagoa Conceicao.

(bonitinhos) clomping on and off with their cartoon backpacks and their school uniforms, which, like many things in Brazil, are pretty relaxed  – and take the form of a cotton shirt or hoody with the school name.   I take the bus to a new beach where I have not yet been, Barra da Lagoa, not sure what I will find.  Each beach on this island is surrounded by its own little village with its own special feel.  Today I take the bus over the mountain to Lagoa Conceicao, and then over another mountain, along a coastal route that winds in and out of clutttered little villages along the shore until I finally reach Barra da Lagoa.

This is a wide open wonderland of sweeping crescent shaped beach,  with a vibrant sprawling town of small buildings backing into it  — very different than any place I have visited thus far.  The big beach looks out on its own collection of little islands, and is lined by open faced restaurants and shops.   Brightly colored houses seem to tumble down the forested headlands on the south end of the beach in bougainvilla clad glory.  Everything is perfect today except for one thing:  my surfing set up is all wrong.  The waves are very very tiny.  Perfect for a chill day with a big longboard, but not so good for my shorter board.  Still its a beach, and the sun is shining, so I am ready to have fun with what I’ve got.

As I wander down the beach looking for the best spot to put in, a run into a

crew of Brazilian and Argentinian twenty-somethings who are making a documentary about the magic of Florianopolis and they ask if they can interview me.  After offering some valuable soundbites in English about the loveliness of Floripa’s coast, I ask one of the local Brazilians if he’s got any advice for the best waves today.  He suggests I check out one of the two beaches south of here Praia Galheta and Praia Mole.  That seems like a pain, since I am already here, but I am eyeing the waves and thinking I probably won’t catch very much.  For Praia Mole I can take the bus,

This, my friends, is a PENGUIN!

he says.  For Praia Galheta, I’d need to walk, but there’s a path over the mountainous headlands.  My ears perk up!  I’d been eyeing those headlands, with their big boulders perched among giant yucca plants way up on the slopes, and had a hankering to explore them.  I inquired further.  This very relaxed seeming guy told me that the hike would take around 30 minutes, but he couldn’t guarantee the condition of the path due to the recent rain.  He gave me further directions in Portuguese and I nodded my head happily though I barely understood.  It was a beautiful day, and I’d been cooped up inside for the last few.  I was ready for an adevnture, surfboard, unwieldy backpack and all.  Before leaving the beach, my friendly direction giver pointed out to me that the birds I saw floating on the water were penguins.  PENGUINS!!!! I am in the land of penguins.  And the water is quite cold.  But not, I should note nearly as cold as in San Francisco. 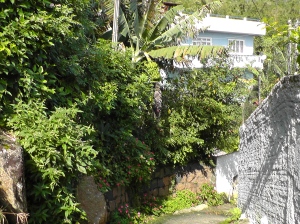 The start of the trail…

Thankfully, as I crossed the bridge, with my huge backpack and surfboard, about to head into the jungle with directions I only partially understood, a Brazilian guy who spoke English asked if I needed help and clarified some of the finer details of the route, warning me against a tempting but potentially disastrous wrong turn I could take that would lead to a treacherous rock path along exposed cliffs.  Sounded fun, but not so fun with a surfboard in tow.

And off I went.  It was dreamy at first, as I traced a narrow path between

houses blanketed in flowering vines on which  butterflies and chirping birds lazed away the afternoon.  But when I reached the forest, the path started to look a bit sketchy, hardly wide enough for a person to squeeze with a little stream of water running down the middle.  The path/stream was slippery, and carried the risk of me faceplanting, which normally wouldnt be such a big deal, but face planting with a surfboard  entails some sort of damage for the board, which after all is just made of foam, covered in a thin layer of fiberglass.  But the adventure seemed worth the risk of a ding or two to my 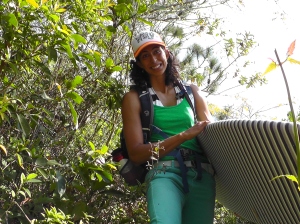 Go go camera self-timer! Getting sweaty on the way up, but starting to gain some elevation!

board, and as I wound my way through the forest, gaining some beautiful views with elevation, the path opened up and took on a more established feel.

Hiking with a surfboard across rough terrain was a new experience.  As I slid my surfboard ahead of me on steep rock sections that required both hands, as it came with me, on unexpected slips and mud slides on my butt down the

Enjoying a magical little tree nook along the trail

trail, and as I occasionally stubbed it against tree trunks along the way, I got 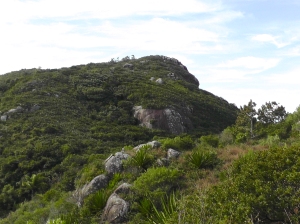 myself used to the idea that this board would probably suffer a lot of abuse during my trip.  No prima-dona boards for me, only rough and ready pirate adventurer surfboards.  Appropriately, my board has a pirate printed on the nose! But pretty soon, my surfboard and I were rewarded for our efforts, when we  emerged onto a magestic grasscovered ridge trail, high up above the town, and oh what views!

Looking south down the ridge. Atlantic ocean on the left. Lagoa Conceicao (a very big lake) on the right

For about 30 minutes I traversed south along the ridge, looking out to the endless blue Atlantic ocean on my left and the vast sleepy valley Lake of Lagoa Conceicao on my right.  Then finally I came to a spot where I could see below me the beautiful beach of Galheta – pristine crystal sand, with lapiz blue water, and sets upon sets of perfectly breaking waves!   I scurried down the twisting trail through powder soft dunes till I finally landed on the beach, sweaty, mud stained, and extremely happy.   The water was full of surfers – (there is another much shorter route to get there from the adjacent beach, Praia Mole), which was a bit of a relief since I promised my Mom that I wouldn’t go surfing by myself in isolated situations.

I made friends with some cool folks, Paco and Letitia who were chilling on the beach.  Letitia was also a surfer so we paddled out together.  And oh man… these were the best waves I’d encountered in Brazil thus far, big perfect crests, breaking with nice rideable shoulders.  There was plenty of room for the hardcore shredders to have their waves and for me to have mine!  I am not used to big waves that break so

Leaving Galheta beach, looking south as the sun sinks in the sky

nicely, and I had the time of my life, charging big sets, and making sweet drops,

feeling like a better surfer than I’d ever felt before.  My pirate board and I were really bonded now!  Oh happiness, you are Galheta on a sunny late afternoon!

I walked back via Praia Mole, just as the sun was getting low in the sky and illuminating the big rocks that traced the headland trail in warm rosy tones.  Praia Mole was also going off, and late afternoon

surfers ran past me into the water to grab a few rides before the sun went down.  I picked my way through the short forest trail to the main road, and then hunkered down with my big beatup board waiting for my trusty but slow steed, ye olde Brazilian  “onibus” (that’s portuguese for bus) .  It didn’t matter that the trail I took that day across the ridge was probably well known to most hikers and surfers on the Island – for me it was the deliciously unexplored Floripan frontier, and I felt like  the pirate surf adventurer printed on my new board, who’d ventured off into foreign waters and found myself a mighty trove of treasure.  Thank you Brazil!