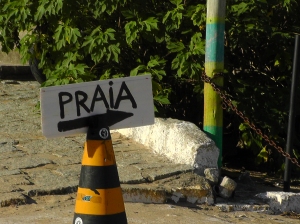 One of the Floripa’s claims to fame is that the waves are always breaking nicely SOMEWHERE on the island.  It’s got 42 beaches with different exposures, land features, and bathymetry (that means underwater topography), which make for different wave outcomes depending on the swell and wind direction.  The locals have a great sense of this.  I’ve heard tidbits: Joaqina works with most everything and that’s where the waves are biggest.  Barra da Lagoa has small but perfectly shaped waves and is the place to go when the southern wind messes up the swell elsewhere.   Praia Mole works really nicely with a Northwestern wind.  And so on…

I am still piecing it all together – but the other day, while I was waiting for the bus to Joaquina, my friend (and former body-boarding champ) Clara happened to walk by on her way to the supermarket and told me that the waves at Praia Mole were particularly good that day.  So instead of jumping on the bus for Joaca, I took a quick jaunt over a different hillside road to land at Praia Mole.

Praia Mole seems a bit more wild than Joaquina, or maybe that’s just because I don’t know too many people there, or because the line up is far from all the seaside cafes, along the rocky headland at the North end.  But Clara’s tip was right on, Praia Mole was serving up some sweet waves that day. 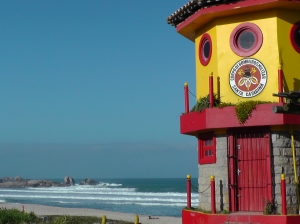 northern end of the beach (Mole means soft in Portuguese), marveling at the dudes in wetsuits who chose to run through this pudding-like medium.  They streamed by me, in an impatient swarm towards the paddle-in spot.  I was watching them very carefully at this point, because it seemed that the ONLY place from which people were paddling in today was off the rocky headland at the North.  They ran across a big  jungle-gym style pile of rocks, out to a point where, as far as I could tell, waves were breaking rather roughly.  Then they waited for just the right moment, and took a leap off the rocks into the water onto their surfboards, steering past the lone boulder ahead before the next big wave broke.

Call me boring, but in my life thus far I have generally tried to avoid jumping into water off rocky headlands where waves are crashing.  I prefer launching my watercrafts off flat sand beaches, where, if the waves are going to sweep you backwards, you will not be smashed against a big, hard, barnacle-covered object like a boulder.  So I was hoping that MAYBE there was another place to paddle in.   I was taking my cues from the locals here.  If I saw just a few people paddle in from the beach, I would have gone for it.  But no one did.  The waves were coming in one after the other, and there was a strong southward current which meant that by the time you got far enough out from the beach, you would have been swept away from the  break at the North end.  It seemed that today, there was only one way in to the waves at Praia Mole, and that was by launching yourself off the headlands.

So after I suited up, I followed the procession onto, up, and across the boulders to the slippery patch of rocks at the end which was the designated take off point.  I lurked right next to that spot a long time, inviting many surfers to go before me so I could get a sense of how the waves were breaking here, and so I could observe exactly how they did it.  A couple guys gave me some advice in Portuguese, which I fear I only half gathered –something about watching out for the slippery portions of the rock and gripping on the mussel shells – but that was useful.  It was all in the timing, making sure that a big set was not coming in to cheese-grate you across the barnacles.  Then you just hopped off and paddled quickly to clear the other boulders that surrounded you.   “If all these people can do it, I can do it,” I told myself.  And when I felt ready, I hopped in.  I’m not gonna lie, I paddled like hell to clear those boulders, and judging by the amused smiles that greeted me when I reached the line-up, I may have had a look of terror on my face.  The southward current quickly helped me get out of the way of the hardcore shredders, and I caught some pretty glorious waves that Mole that day.  And when I rode a really nice left, all the way into the beach, I did what I saw everyone else do, and I got out and ran through the sand back to the headlands.  A great introductory day into the world of launching off rocky headlands on my board.  Many firsts here in Brazil!